In the last 1 1/2 years since we moved to Costa Rica we have been working very hard. But we did it! We have built our dream house in the jungle! 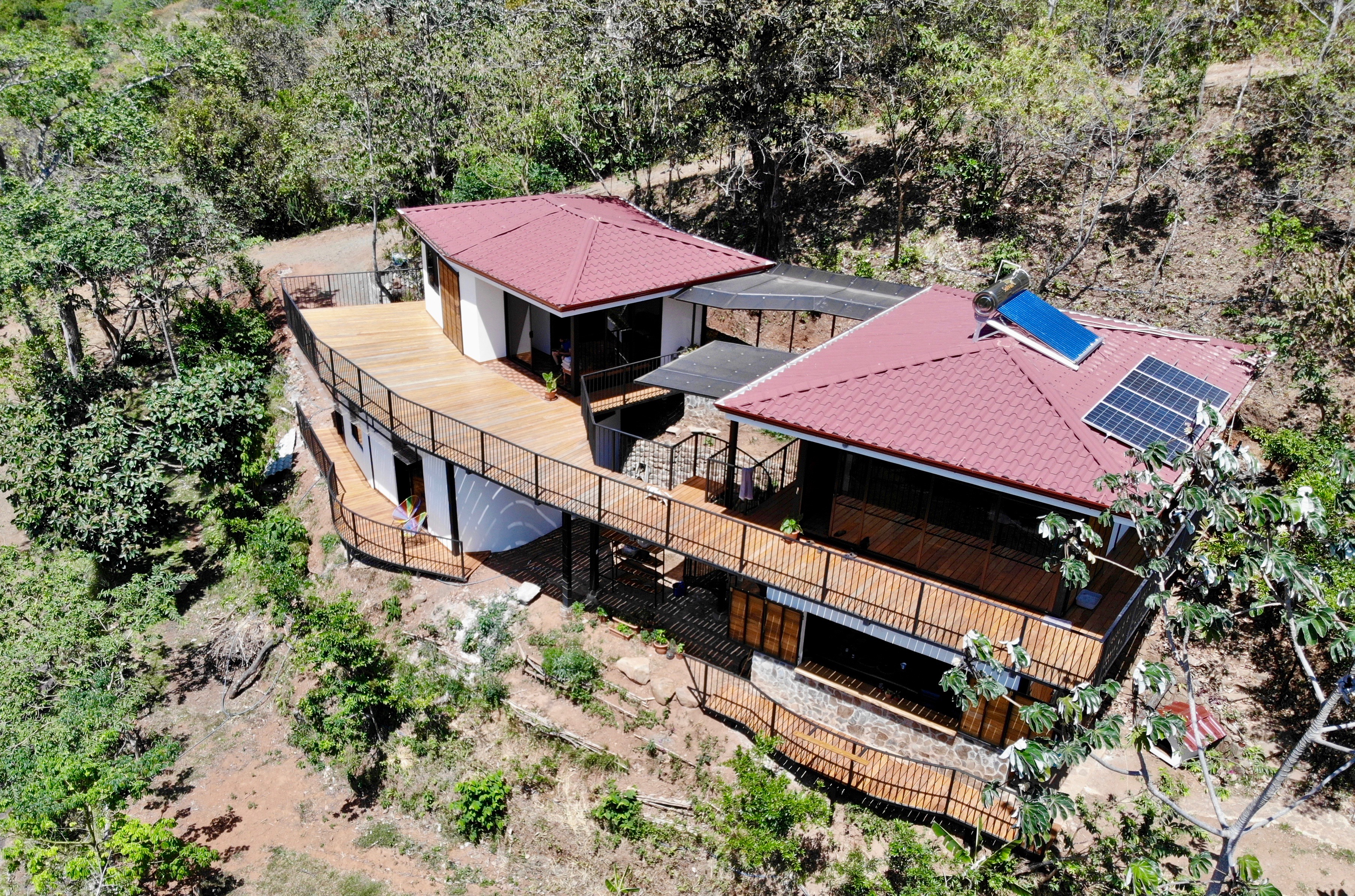 Water is life, quite literally! Plant life, insect life, animal life all spring into existence where there was none and then thrive, by simply adding a natural pond. In this short video we show you how we were able to do exactly that.

So far we had some of the basics dealt with: we had fresh water on demand and we had a toilet.  I love camping, but when it rained a lot I still had to sleep in the car and now I was really ready for the next step, to build the rancho! A shelter from heat and rain, a place to cook comfortably, a place to hang your hat, relax and spend the night. 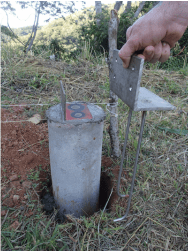 The rancho will be the headquarters, the center of operations during the first long phase of the project before the masterplan starts to take shape. The basic design involves a light wooden frame mounted on six concrete foundations to isolate the wood from the ground humidity and hold the structure tight against the forces of the wind. It features 40 square meters of shade and an elevated sleeping area that can fit two in a medium mattress. 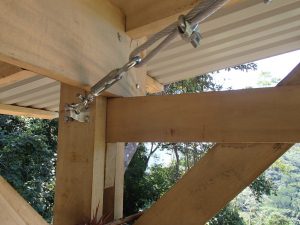 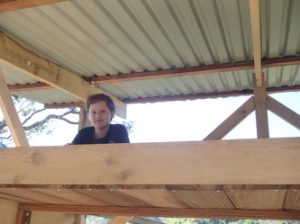 The rancho has a 30 Watt solar panel and a 100 Ah battery that power 5 12V LEDs and a charging station for electronics. This is enough power to recharge all your gear and light the rancho for about 4 hours daily. The multi-purpose rancho is now a place to sleep, cook, hang out when there are guests and even store materials. 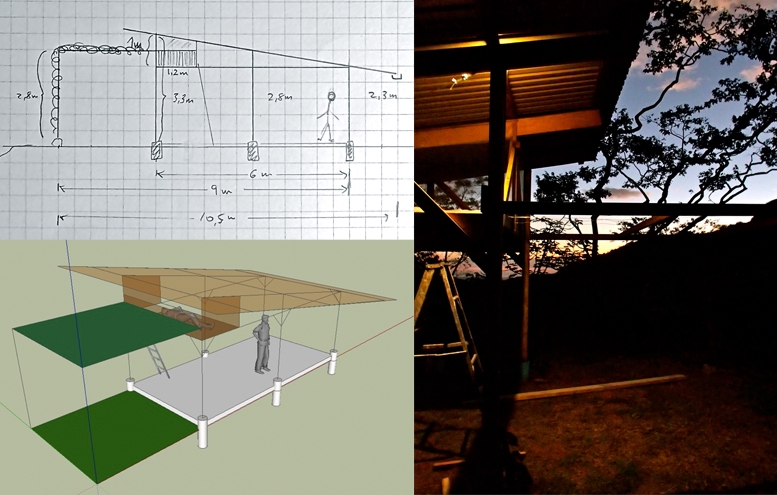 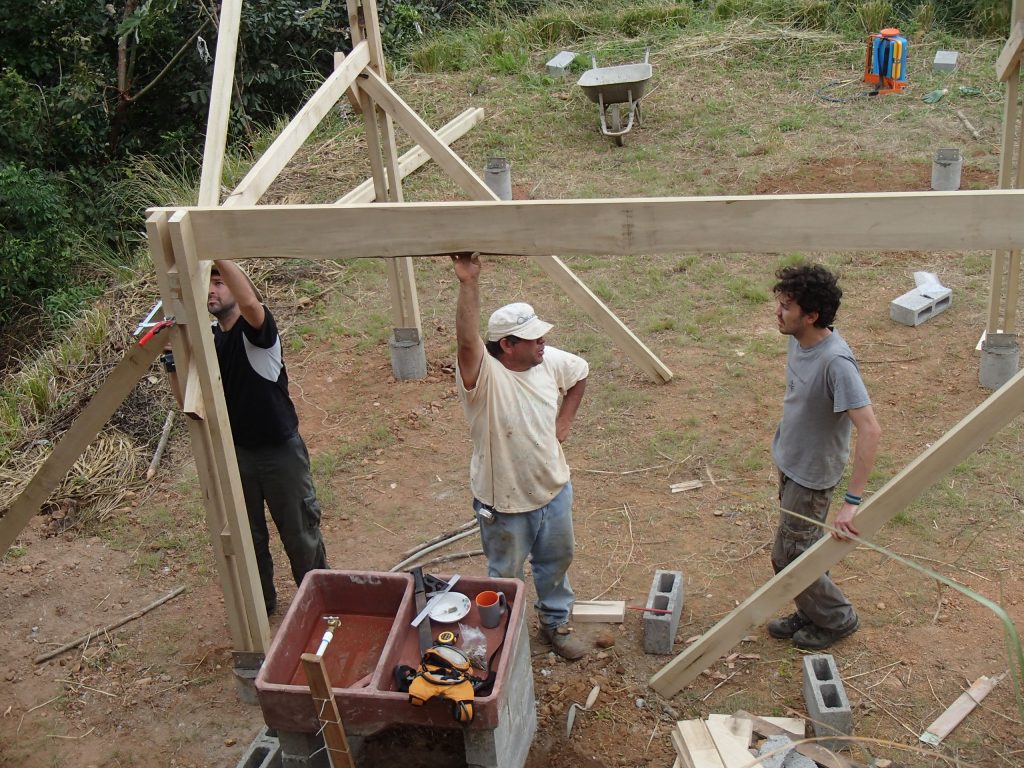 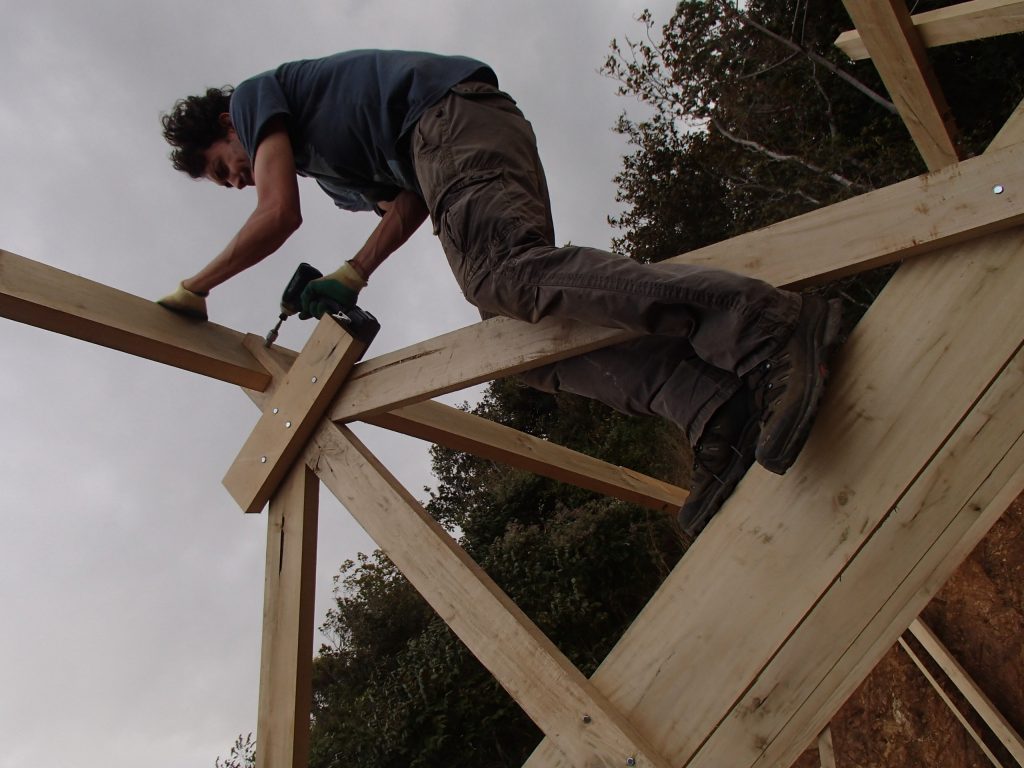 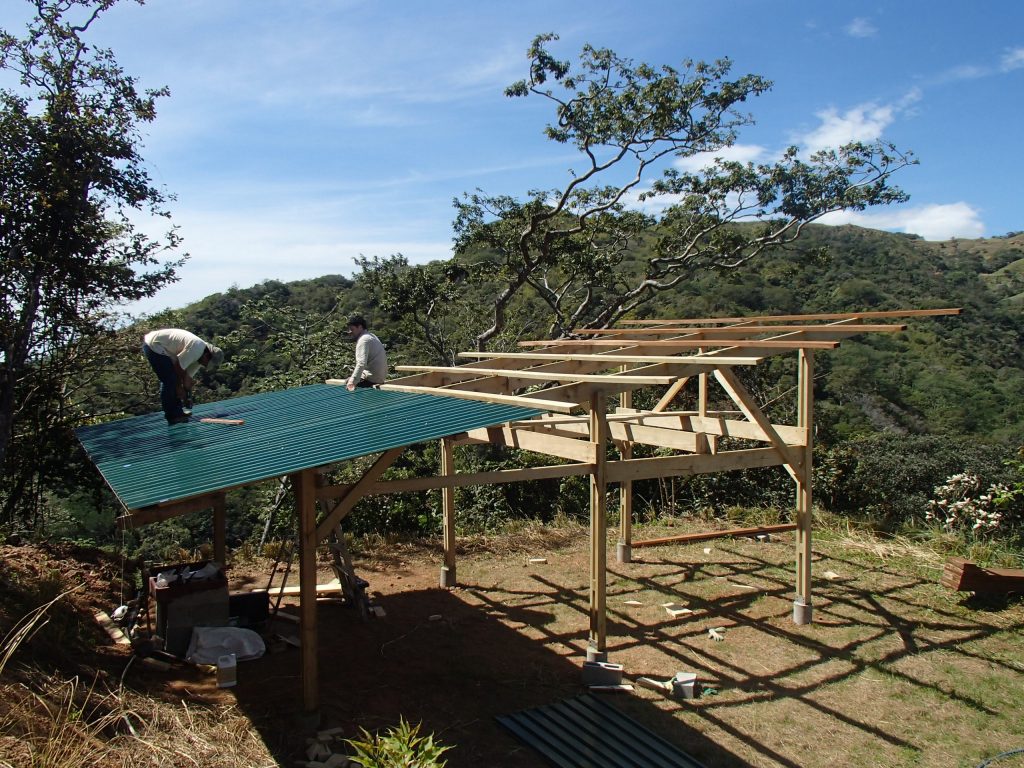 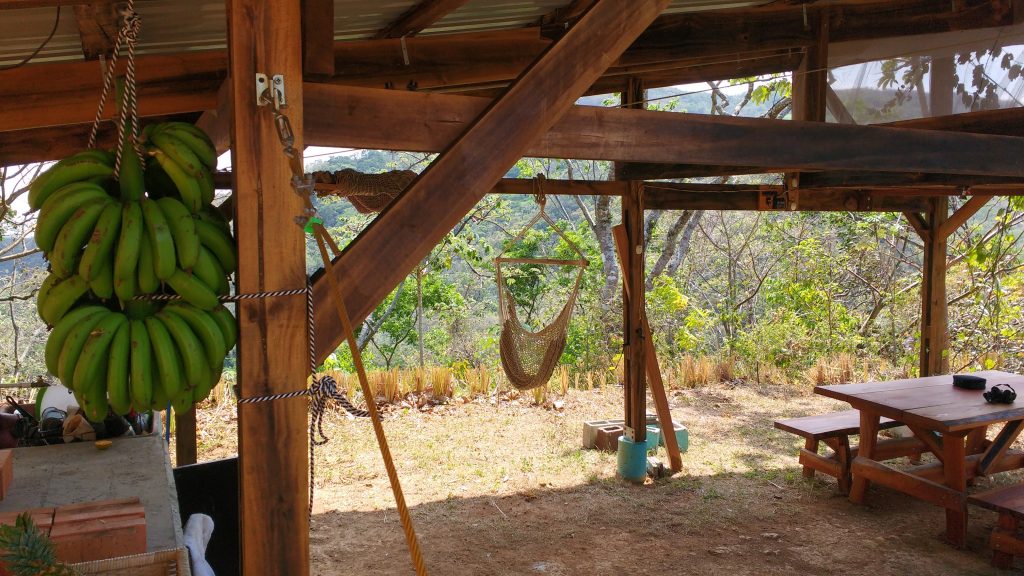 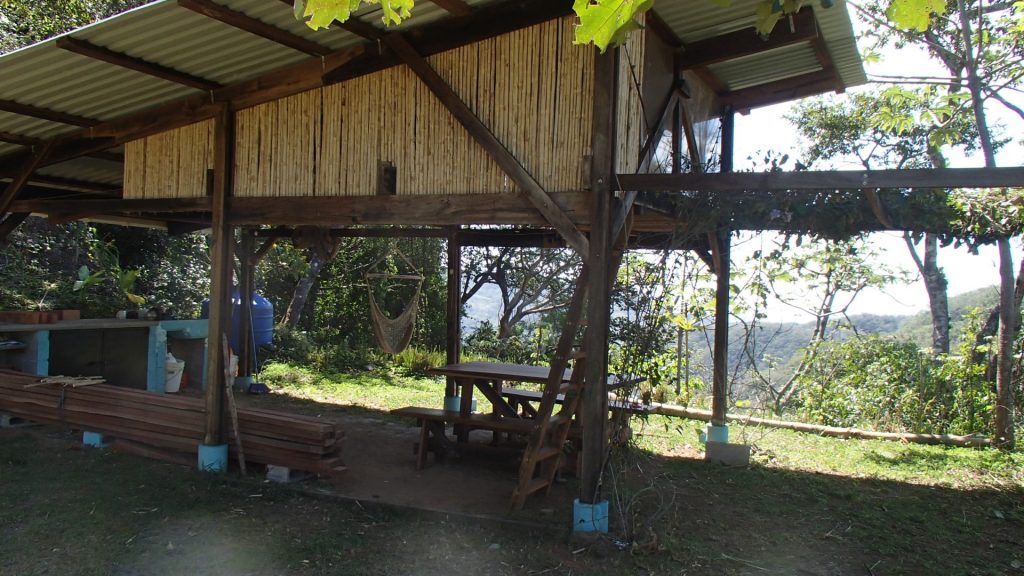 In the previous post we dealt with the most basic of needs both for the site itself and for the people working on it: water. Having water on demand is crucial if you want to spend more than a few hours in the site. Following this logic, the next most important work of infrastructure would be a toilet and a roof. If you want to spend a whole day on the site you will want to rest from the heat of midday or get cover when it starts raining. And eventually you will also need to go to the little room, too.

We built the dry toilet first. 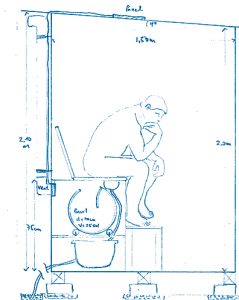 A dry toilet is one that runs without flowing water. Not to be confused with a “hole-on-the-ground” latrine, which are typically a sanitary disaster, a well designed dry toilet is near to odorless, it doesn’t attract pests or spread disease and it is a very efficient means of waste management. The main idea of the design is to separate liquid from solid waste, so that the latter can decompose in an aerobic process, as opposed to the anaerobic version, which is typically responsible for bad odors and disease.

The urine is captured by a small cup positioned anatomically optimally for both sexes, and is routed through a hose away from the hut and into a 1-meter hole filled with gravel. Urine is sterile and filled with beneficial minerals, so it can be disposed of directly into the ground without problems. The solid waste falls into a plastic drum mounted on wheels, so that it can be rotated from the outside of the hut. After each use, a scoop or two of saw-dust is added, to balance the nitrogen-rich feces with a carbon-based material to help the natural decomposition process.  If you rotate it in one direction, the lid closes and the pyramid of waste can be flattened without touching it. If you rotate in the other direction, the mix can be emptied into a container placed below the drum. It is very important to enclose the drum in a sealed chamber, so that no animals or insects can enter it. For this purpose, the toilet needs to have a lid that closes tightly over the chamber. Additionally, we have installed a small fan that directs the flow of air (and that way also of any occurring odor) into a chimney away from the inside of the hut. We don’t use the fan, because we noticed it is not needed. 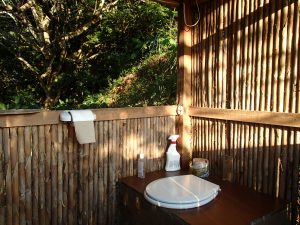 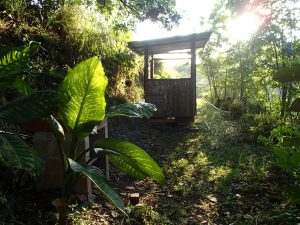 Usually the decomposition process takes about 4-6 months and the end product is basically natural fertilizer, that dos not resemble the original waste at all, but has become a loose, earth-like, earth-smelling material, which is now ready to be safely used on gardens and trees.

This is a low-budget, eco-friendly solution that does not waste fresh water and does not need septic tanks or any concrete. So instead of diluting your waste problems in drinking water, the way we do it in cities, here we recycle it intelligently and reuse it. This is truly the alchemy of waste management.

Water is the most important resource. Nothing strives without enough sunlight or in a bad soil, but nothing has even a chance to survive without water. Water is a very powerful energy. It grants life, and if it’s not managed properly, it takes it away through erosion. Therefore, the first matter of business after purchasing the site was water management, and it was an urgent one. 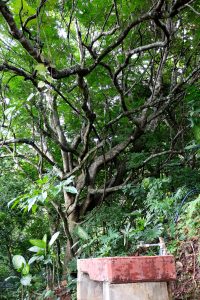 Water for the 100 newly planted fruit trees (which replace what were abandoned cow pastures), water for the pond that would later become an oasis of life and of course, water to quench our thirst after our hard labor. The installation of drinking water from the municipality was straight-forward but essential. You can’t spend more than a few hours working on the site without drinking water. On the left, this was the first man-made structure on site, located in the shade of our beautiful Lorito tree, which also serves as base for the “jungle-shower”. 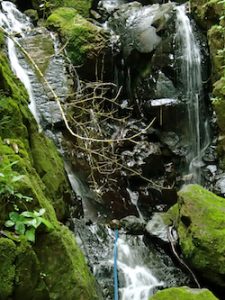 The laying of the hose that moves irrigation water from a nearby stream uphill was definitely a more adventurous endeavor. First, the inspection of the stream and the choosing of an optimal intake location, then some calculations to know how much hose to buy based on GPS collected data to account for distance, slope and resistance in the hose – math works! We laid ca. 600 meters of 1″ hose through dense jungle, partly buried, partly elevated over steep and slippery ravines. Now a constant flow of clean, free water runs into our site using only the force of gravity.

The borrowed water flows through gardens and fruit orchids, allowing the plants to survive, lay deep roots and generate ever more and more organic matter, which in turn strengthens and fertilizes the soil naturally. More humidity then balances the temperature extremes locally, thus creating better conditions for insects and other creatures. The excess water flows either inward into subterranean water beds, or it flows down back into the same stream. Some of it will evaporate and build local clouds, which will carry the water up the mountain, for it to return in form of rain and close its amazing cycle.

When the site was purchased, there was serious damage caused by erosion, which was aggravated by deforestation and the introduction of foreign grasses that were supposed to feed livestock, but in the long run took over and asphyxiated the local vegetation. The first few years of our work was focused on the implementation of erosion-countermeasures. Most notably, the right canalization of water in high-rain events, and the construction of water swales, which are designed to move rain water across the site in the slowest way possible. Reducing the speed of passing water is critical to lower its erosive force, and at the same time to keep it longer as it passes through in order to absorb it and benefit the most from its presence.